As you can see, this website has been neglected in recent years but I am pleased to say an update is on the cards due to a renewed interest in all things Haunted Harborough! I am always surprised when a flurry of activity occurs online from people who discuss my book and dvd in a positive manner and ask if both are still available. The good news is that copies of the DVD are still being sold each year and I am now thinking of revisiting the subject as an update to both book and film to respond to that demand. If you have any spooky tales yourself, please email me so that I may include them in my research/investigations.

I had a few ‘fans’ pop in during my book signing with books they had already read but wanted me to sign. Firstly, I didn’t realise I had any fans so much appreciated.

One ‘fan’ in particular brought in a well thumbed edition he had read 6 times! He went on to say, …”by far, one of the best books I have read. The only bad thing is that there aren’t any more.”

He went on to add more complimentary comments about particular parts of the book and my honesty in the way it was written. Very much appreciated. Thank you.

At my recent signing event, I was approached by a couple claiming their house was haunted. The husband showed me a photo of his wife’s neck after she was supposedly throttled by an unseen force. The pic showed three distinct ‘burns’ in the form of three parallel rings around her neck and throat. If you are those people from Jubilee Gardens, and would like to tell me more, please contact me by email. Thanks.

Having seen the latest ‘Most Haunted Live’ I felt I needed to remind people that this programme is primarily created for entertainment purposes and not a credible investigation. On most vigils, nothing happens for at least 90% of the time and the other 10% is usually inconclusive – mostly due to how controlled the environment is. This of course, would be boring television. Audiences would be lost and most importantly, revenue.

It is important to remember that if you are serious about finding proof of the existence of ghosts, you have to discount all other possible explanations first before jumping on the paranormal bandwagon. My questions regarding Most Haunted Live (don’t get me wrong, I was a fan) are ones that an archeologist may ponder, having a film crew trample all over his precious site! For instance:

All in all, it is a shame that most things are staged**. American versions of the series all carry a disclaimer that states that the programme is for entertainment purposes only. I so much WANT to believe in the show but sadly, a lot of what I see is so transparently engineered. Lets face it, no-one wants to go to a birthday party with no games or cake!

*All views are my personal opinions and not a statement of fact. **Ditto.

Just wanted to say thanks to all of those who popped along last saturday and to those who chatted about their own ecncounters with the supernatural! Especially pleased with those who brought their own copies of my book for me to sign. I didn’t realise I had fans, so thank you for that!

A big thanks to organisers, Sofi and Alistair, who spent a lot of time and effort in creating a magical environment for the children and parents who came dressed in Halloween costume. 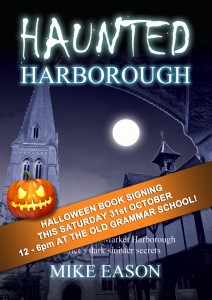 Pop into town this Saturday and join in the Harborough Halloween event at the Old Grammar School from 12 – 6pm. I will be there to sign some books!

Quite a few people have asked me if I have heard anything about hauntings at the council offices….after a bit of poking around, I understand that witnesses claim to have seen the ghost of a girl on a staircase. This is linked to a suicide there years ago and also the image of a man in a tall black hat. If anyone knows of any other details, please let me know. Thanks.

I will be appearing on local radio station HFM on Halloween night thanks to presenter Owen Brookes. Catch me amidst all the scary themed music he will be playing. Also appearing is James Carpenter who organises the annual ghost walks around the town, originally based on my book and film but now with other locations added.

Another person has contacted me regarding strange goings on in an office on St. Mary’s Road, ‘Lighter Life’ to be exact. Stay tuned for more info.

I have just been contacted by someone who was frightened by the apparition of a man pointing a finger at him! It occured in a house in Rushden. Stay tuned for more details as I get them.